There seems to be a lot of disagreement about the best foods for IBS. The one consistent piece of advice is to eat foods containing soluble fibre.

Why is soluble fiber important? Because, when you eat it first, at the beginning of your meal, it “pre-conditions” the bowel by forming a kind of thick gel that bulks up in the intestines, giving them something to work with. This will slow down your transit time if you’re prone to diarrhea, or help to move things along if you suffer from constipation.

HOWEVER! You need to be a bit careful about your sources of soluble fiber. I’ve read nutritionists who recommend legumes such as kidney beans, soy beans, chick peas, etc. as a good source of soluble fiber for people with IBS. I find this a bit strange, as we all know that legumes are notorious “fart foods” and are hard to digest even for people who don’t have digestive problems.

Legumes contain a sugar called raffinose. It’s the same sugar that’s in cruciferous vegetables like broccoli and cauliflower, which is why they are hard for IBS people to eat. To be digested, raffinose requires a specific enzyme not made by the human body.

Biochemist Robb Wolf of Paleo fame, says that legumes can damage the intestinal wall just as grains and gluten do. When food molecules get through your intestine and into your bloodstream, your body mounts an attack on them which provokes auto-immune conditions such as allergies, lupus, rheumatoid arthritis, psoriasis, and other health problems. Apparently, legumes also block the absorption of several vitamins and minerals.

I also see yogurt being touted as a good food for IBS because of the supposed probiotic effect. However, Dr. Natasha Campbell-McBride, who developed the GAPS diet and has helped thousands of patients heal from digestive problems, says that store-bought yogurt is not cultured long enough to create the kind of probiotics that actually do anything useful in your gut.

Her recommendation is to make your own yogurt, preferably from organic milk. Fermenting milk into yogurt makes it into a live food (whereas pasteurized milk is a dead food, having been heated to the point where all the enzymes that would help you digest it have been killed.)

One more caveat before we get to the list of best foods for IBS.

Even though the foods listed below are typically good for people with IBS, some of them might not agree with YOU. If you have food allergies or sensitivities, you need to take that into consideration.

1) Bananas. A standby for many people with IBS.

2) Peeled apples – Caution: if you have trouble with fructose or other sweeteners, apples may not be for you.

3) White rice. Although brown rice is considered nutritionally better than white rice, it contains insoluble fiber which can be a problem for people with diarrhea.

4) Squash and Pumpkin. Organic squash makes a great dessert! Sprinkle it with cinnamon before baking. If you tolerate olive oil, you can rub the flesh of the squash with a bit of oil before sprinkling on the cinnamon.

5) Carrots and Parsnips. Try them boiled until soft then mashed together.

6) Lean Protein. Protein is a vital nutrient. Try skinless chicken, or white fish such as sole. Flavour with herbs such as ground rosemary and marjoram, lemon, a touch of sea salt.

Why does it have to be lean?

The fat attached to protein stimulates the production of a hormone called cholecystokin. This hormone makes the bowel go into contractions, so if you’re prone to diarrhea, that will speed things up even more. If you have constipation, you might be okay, OR this may be a source of abdominal cramps for you. So lean proteins are the safer choice.

7) Chestnuts. Cut a line or an X in the shells (to keep them from bursting), then put them on a cookie pan and roast them in the oven at 425F for between 10 and 30 minutes depending on how well-cooked you like them (more cooked tends to be a bit drier.) Stir them around or shake the pan every so often to make sure they don’t burn on one side.

8) Oatmeal. Try it with banana cooked into it and a sprinkle of cinnamon. You won’t need additional sweeteners.

With the exception of the lean proteins, all the foods on this list are sources of soluble fiber, so remember to eat them at the beginning of your meal. You may find that, once the soluble fiber is in your gut, you may be able to eat salad at the end of the meal. But proceed with caution if you are prone to diarrhea.

That’s our list of the best foods for IBS. Please leave a comment about the foods that work best for you.

Hi. We are Karen Alison and Kathy Bell and we help people self-heal their IBS naturally, with a doctor-recommended method that addresses the least-recognized aspect of this hellish condition – the way the brain triggers uncontrollable symptoms in the gut.

IBS is a lot like having PTSD (also once believed to be untreatable) because of the way it triggers your autonomic nervous system to produce symptoms. But, in a few short sessions, you can learn how to retrain your brain so you shut down the neural pathways that lead straight to diarrhea, constipation, bloating, gas, and anxiety.

If you don’t deal with this underlying root cause of your problem, you’ll have to spend the rest of your life at the mercy of your Irritable Bowel… and it usually gets worse.

36 thoughts on “Best Foods for IBS”

How to STOP the Top 5 “Hidden” Triggers of IBS

Enter your name and email address for instant access and great IBS health tips. It's free! 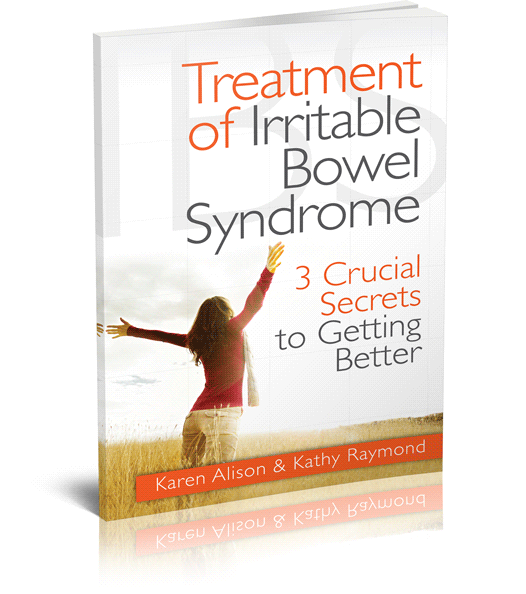 Get the full No IBS Program: